Forest Edge Elementary School opened on September 7, 1971, and was the third elementary school built in Reston after Lake Anne and Hunters Woods. Our first principal was Ronald N. Carpenter. Forest Edge was designed by the architecture firm of Charles M. Goodman Associates of Washington, D.C., and was built from 1970-71 by Burrows and Preston, Inc., at a cost of $1.2 million.

Our school was one of the first in Fairfax County Public Schools (FCPS) to have classrooms built specifically for special education, music, art, and physical education. The entire building, with the exception of the gymnasium, was air conditioned–a rarity among schools at this time.

During the 1960s and 1970s, an educational philosophy called “open schools” became very popular among educators. Most of the new elementary schools built in Fairfax County during this era, including Forest Edge, were designed as open schools. Open school classrooms were built without doors and were clustered around "pods" that could be divided with moveable partitions into separate learning areas. In each pod, five or six teachers worked as a team with children of multiple ages grouped according to their differing abilities and skill levels. At Forest Edge there were six pods, the largest of which held 180 students. The pods were named after lunar craters found by NASA astronauts during the Apollo 15 mission: Arrowhead, Bridge, Dune, Front, St. George, and Salyut.

A typical day in Front Crater began with homeroom, followed by language arts, lunch, math, physical education, music, social studies, and science. During free periods, and with a teacher’s permission, a student who found a lesson in another part of the pod interesting could join the other group and take part in the lesson. The pod with the youngest children was Bridge Crater, which held groups of children between the ages five and seven.

Forest Edge was originally built for a total capacity of 990 students, and by February 1973 was slightly over capacity at 1,025 students. In January 1974, then P.T.A. president Diane Altman wrote a letter to the Fairfax County School Board requesting additional teachers for Forest Edge because enrollment had swelled to approximately 1,150 students. The rapid student enrollment growth was driven by the continued development of Reston which drew many families with young children to the area. School-age population growth led to the opening of three more elementary schools in Reston in the 1970s: Dogwood in 1974, Terraset in 1977, and Sunrise Valley in 1979.

What’s in a Name?

The Ferret and The Eagle

In 1981, the entire school was involved in selecting a school motto, school colors, and a school mascot. The first appearance of a mascot in our yearbooks was in 1986.

The ferret mascot was replaced by our current mascot, the eagle, in 1988.

During the week of May 7, 1981, Forest Edge Elementary School celebrated its tenth birthday. Every morning that week, the school day began with a radio show which was produced by some of the teachers. Each of the broadcasts contained stories related to the history of our school. Events held during the week included a science fair, a cultural arts fair, an arts display, a tree planting ceremony, and a music program featuring our school’s string orchestra, band, and chorus.

In 1982, the six craters, or learning bays as they were called by that time, were half-subdivided into three enclosed classrooms - 18 in all. The classrooms were enclosed to make classroom spaces more manageable, comfortable, and intimate. When Forest Edge was built, the original architect created plans showing where walls could be added in the future if so desired, and the new walls were placed where the architect intended for them to go. When completed, Forest Edge became 50 percent open classrooms and 50 percent enclosed classrooms. Open space classrooms eventually fell out of favor altogether in FCPS, and at Forest Edge the remaining open classrooms were enclosed during our first building-wide renovation in 2003.

During the 2003 renovation, a stage, new classrooms, and new computer labs were built, wireless internet and SmartBoards were added in every classroom, and the library was redesigned. The renewal was completed in 2006 at a cost of $8.2 million.

Yet, with all of these incredible changes, the fantastic spirit of the school remains unchanged. Forest Edge remains a school that accepts people for what they are and what they do – a warm, nurturing environment where students can grow both socially and academically.
~ Frank Bensinger, Principal of Forest Edge (1999-2011)

Extra-curricular and co-curricular activities and clubs have been a staple of student life at Forest Edge since its founding. Strings, band, and chorus have been offered at Forest Edge for decades. If you look through our old yearbooks, you’ll find some short-lived clubs and others that still exist albeit with different names. During the 1990s, Gentlemen by Choice, the Young Astronauts Club, Chess Club, Computer Club, Homework Shop, Math Club, and Poetry Club were very popular.

Stroll up the sidewalk from our school to Becontree Lane and you’ll find a path leading to a beautiful garden of tulips, hydrangeas, Hyperion daylilies, Gold Flame spireas, and butterfly bushes. At the center of this oasis is a circle of stone pavers with a plaque at the center. The garden was created to honor a former Forest Edge teacher, Reginann “Gena” Rohlfs, who passed away in 2008. 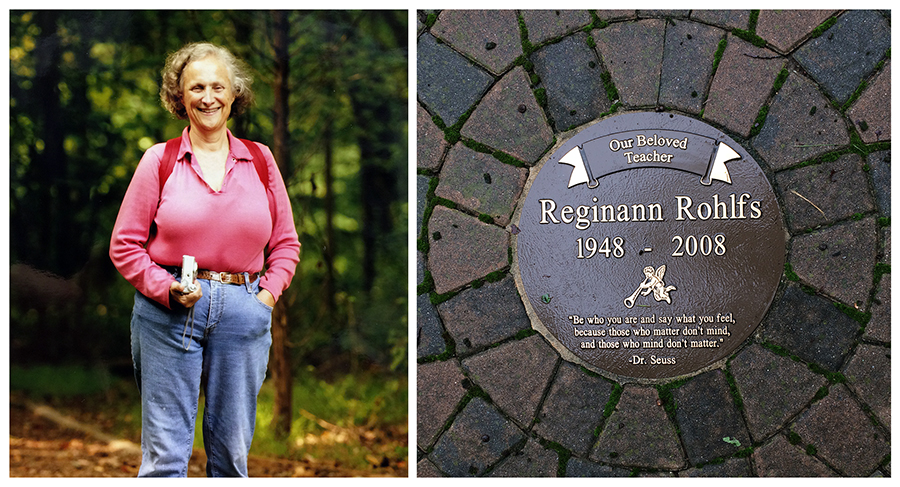 Gena Rohlfs was Forest Edge’s resident zoologist, rocket engineer, mythologist, and gardener. She was a lover of music, art, theatre, poetry, storytelling, history, and math. To quote her eulogy:

Gena did not teach from behind a desk; she taught from her heart, and her heart is with us now and always. Her legacy is demonstrated in the hundreds of friends, students, and families whose lives she has touched so profoundly. Her contributions are immeasurable; her lessons, about life and its pursuit, are permanent. The old saying “Once a teacher, always a teacher” provides us with the knowledge of comfort that Gena will continue to teach each of us how to lead more courageous lives, how to care about life as deeply as she cared, how to love as purely and passionately as she loved. Thank you, Gena.

Forest Edge Elementary School has had nine principals since we opened in 1971. During the decade of the 1970s, there were three principals: Ronald N. Carpenter (1971-1974), Margaret A. Koryda (1974-1977), and Sue Lee Williamson (1977-1980). Pictured below are principals Carpenter and Williamson. At the present time, we do not have a photograph of Margaret Koryda.

Don't Be Afraid of Excellence

My hope for the boys and girls of Forest Edge is that you make the most of your time here; that you study hard and learn all you can. Make friends and learn from them. Help each other to be the best you all can be. Get to know your teachers and harvest all the knowledge and wisdom they have to share. School can be fun but more importantly this is where you’ll get the necessary tools to be a productive, successful member of society. Don’t be afraid of excellence. Go after it each day of your lives. You were born to be winners.
~ Assistant Principal Carolyn Williams’ 1989 yearbook message to students.